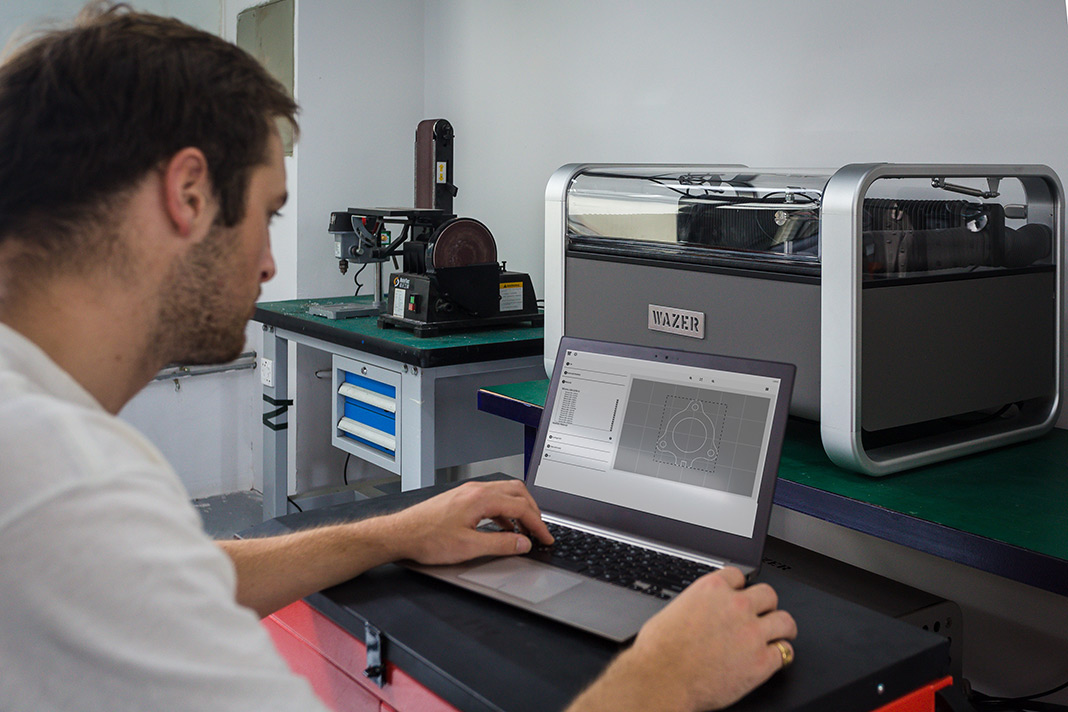 Small-footprint waterjet cutters eliminate the burdens of outsourcing for engineers and manufacturers.

By Nisan Lerea, Co-Founder and CEO at WAZER

Companies that are involved in new product development and manufacturing are no strangers to prolonged weeks of lead time when dealing with outsourced suppliers. When outsourcing, it is not uncommon to encounter a wait time of two to three weeks or more for custom parts; add to that a fragmented supply chain riddled with disruptions, and wait times may be extended even further. Due to the hidden costs associated with product delays, it is difficult to predict total expenses, making longer wait times both costly and operationally inefficient.

These issues have caused many in the industry to search for alternatives to outsourcing. Engineers and manufacturers should be able to access the parts they need on-demand, meaning the same day or the next day – not weeks. Among the best ways to create and maintain such a workflow is to replace outsourcing by implementing in-house small format digital cutting tools that are accessible and easy to use.

Waterjet cutters, using high-pressure water mixed with abrasive particles, can cut through nearly any material needed by engineers and manufacturers, including sheet metal, plastic, composites and rubber. Access to this technology in-house allows for custom parts to be created as needed, which will keep projects moving forward swiftly.

Remaining on schedule in the prototype phase

Prototyping is inherent to the design process and is a repetitive process that includes design, building, testing and evaluation. Take, for instance, a bicycle manufacturer who must make several prototypes during the process of creating new designs. When outsourcing parts from fabrication shops due to limited in-house capabilities, several potential challenges arise. While the production of custom parts is not a huge undertaking for the outsourced fabrication shop, a single piece will most likely become a lower priority. Furthermore, if any mistakes are made or changes are needed, fabrication shops must start over, with repeated delays.

While additive tools such as desktop 3D printers can only print parts in plastic, a subtractive tool like a desktop waterjet lets engineers quickly make prototypes themselves using the actual material as the finished product, then perform tests and implement necessary changes. For example, if an engineer is designing a new belt-drive system, a waterjet enables them to create an aluminum bicycle sprocket in-house that allows the prototype to be fully functional. Conversely, a 3D-printed plastic sprocket won’t work for a functional test, because it could not handle the loading of actual riding.

When job shops need shims to perform repairs and maintenance on old machinery, they face the challenge of sourcing a shim in the exact thickness, material and profile. Instead of using an angle grinder or other handheld power tools, a small waterjet can easily cut custom sheet metal parts on demand. Along with eliminating lead times, its CNC control allows for exact replication to make multiple copies in a variety of thicknesses and materials.

For example, in repairing the gearbox of an old lathe, some of the bearings need to be shimmed to ensure all the internal components fit together precisely. These shims are often made from tool steel, a very hard material that is tough to cut and requires precise customization. For industrial equipment repair shops that may take on such a project, stocking all types of shims for all types of machinery—some being 50 years old or more—is impractical. Access to an in-house tool that can easily cut any shim on demand, in any thickness, and from any material, such as a small-footprint waterjet cutter, saves time and avoids the burden of outsourcing.

Large-scale waterjet cutting machines have not historically been available to everyone, as the size and expense made them almost exclusively suited to large industrial companies. WAZER is the first-of-its-kind: a desktop-sized waterjet cutter offering industrial-grade technology to any factory or shop at a revolutionary price point. The ability for any company of any size to utilize waterjet cutting technology easily and affordably grants them creative freedom. With the tech widely accessible, it is allowing businesses to avoid outsourcing and enable engineers and manufacturers to turn their ideas into physical realities in-house, keeping projects right on schedule.

About the author:
Nisan Lerea is the Co-Founder and CEO of WAZER and an inventor of the world’s first desktop waterjet cutter. A consummate “maker,” Nisan spent many hours in the machine shop during his time at the University of Pennsylvania working on projects including a Formula 1-style race car. He needed to cut sheet metal but only had access to laser cutting, which could only cut soft materials. Nisan set out to solve the problem, inventing the first small-scale waterjet that would become WAZER. While working as a mechanical engineer, Nisan realized that other designers and engineers still faced barriers to waterjet cutting, so he teamed up with former colleague and fellow Penn Engineering student Matt Nowicki to launch WAZER in 2016.