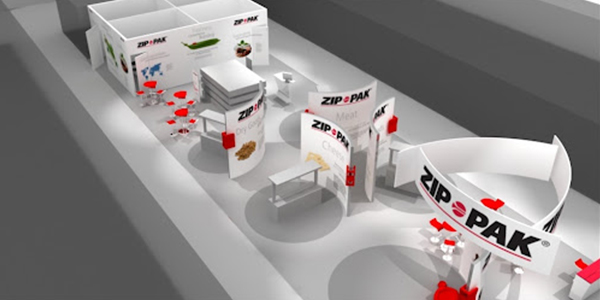 Follow the history of Zip-Pak over the past 50 years and you’ll follow the history of reclosable bags, a science that keeps consumers wrapped in an ever-changing sea of convenience packaging. In fact, explains Director of Sales and Marketing Robert Hogan, it is the very savvy consumer that is driving the mother of invention in the multi-billion-dollar food packaging industry.Take grapes, for example. Explains Hogan, Zip-Pak, inventor of the technology licensed to Dow Chemical that gave birth to ZIPLOC(r) resealable bags in the 1960s, had launched a series of focus meetings during which a more convenient medium for the storage of food items, such as grapes, was addressed. As a company that had been involved in packaging for Chile’s agricultural industry – which exports roughly a billion bags of grapes annually – Zip-Pak took heed to the focus group’s concerns and launched a campaign to change the way the grapes were packaged. In club stores such as Costco, this packaging came in the form of rigid plastic “clamshell” containers, preferred because they were self-standing and could be piled in an aisle for display. “Consumers in our focus group said that was nice, until you got the grapes home,” Hogan explains. Bulky, these containers took up a lot of room in the refrigerator and when it was time to throw them out, they likewise were the largest item in the recycle bin. “Two years ago, none of Chile’s grapes were in zipper bags – now more than half are in resealable bags,” Hogan says, adding, “Consumers are quite savvy in their knowledge of resealable bags.”

As popular as they are now, it’s difficult to remember how revolutionary resealable bags appeared when comedian Dom DeLouise touted the convenience of ZIPLOC in numerous commercials in the 1970s – the name itself has virtually become synonymous with the resealable feature. But Zip-Pak can trace its roots to 25 years prior, as a company called FlexiGrip which marketed a “toothless zipper” primarily used in pencil and crayon cases.
Soon after, in the 1960s the company took a license from a Japanese firm on the process of making resealable bags from a big tube of film – called “blown film” – with the zipper integral to the tube. It was flattened and cut into individual resealable bags of various sizes for holding everything from nuts and bolts and jewelry.

Over the years substantial improvements have been made to the basic technology – manufactured under the Minigrip name – but the applications were limited. “We were really just selling empty bags,” Hogan says.

In the mid 1980s the Zip-Pak business was formed to bring resealable zipper technology to consumer packaged goods by adding the value-added feature right on the packaging line at the customers plant.

Baking soda … and more
The moral to this story is: Never underestimate the power of the consumer to latch on to a good product and then demand it in greater numbers. Now with more than 200 patented zipper solutions, Zip-Pak’s handiwork can be seen everywhere there is food, and is most notably utilized by Kraft for its shredded cheese and Oscar Mayer for its deli meats. The list of users and uses, however, goes on, from frozen chicken to produce to pet food to personal care products, such as wipes and cotton balls.

Most recently, Arm & Hammer manufacturer Church and Dwight decided to enter the field and offer its baking soda in a large-format resealable bag for products sold
in club stores. The new package utilizes Zip-Pak’s proprietary Powder-Proof(tm)
zipper. The film and zipper work in unison to form a moisture barrier to keep
the baking soda fresh and powdery. Patented evacuation ports eliminate the
product from the profile area, which means the zipper area stays clear, and can open and close easily; the Powder-Proof(tm) zipper is ideal for granular or powder products.

In another case, Zip-Pak enabled Plum-rose USA, one of the largest producers of premium sliced meats and deli hams in the United States, to offer a new package for a planned line of high-quality, thinly sliced, uniquely flavored meats, called Danola Supreme Deli Classic meats. Zip-Pak’s SLIDER(tm) technology was especially made for preformed pouches used with fill/seal equipment, as well as for automated form/fill/seal equipment, and eliminates the need to worry that a family member didn’t close the zipper properly, sacrificing food freshness. The slider is described as the ideal solution for manufacturers who want to give consumers a preferred package without sacrificing fill speeds on their packaging lines.

There seems no end to the ways in which Zip-Pak puts its technology to use, offering engineering solutions to packaging problems with continual research into new resin development and profile designs. As another example: The company devised a barrier closure for shelled walnut producers who must harvest their product during the summer, six months before walnuts come into peak demand during the holiday season. The product gives the shelled walnuts package a resealable feature enabling the walnuts to retain a shelf life of up to one year.

Many ways to seal a bag
A division of Illinois Tool Works, Zip-Pak has become a worldwide leader in resealable packaging technology with solutions that can be applied across a spectrum of uses in a variety of sizes and shapes. Among its advances in the industry are:
• EZ-Align(tm) Zippers – multiple interlocking profiles make it easier for consumers to align the zippers and re-close the packages;
• One-Time Locking(tm) Zipper – for tamper-evident applications, this closes but will not reopen, and is ideal for medical and security industries;
• Degradable(tm) Zipper – used whenever degradability is required, it carries a three-month shelf-life and is available in all webless zipper profiles;
• Surlyn(r) Compatible Zipper – a joint effort of Zip-Pak and DuPont Packaging and Industrial Polymers, this allows resealable packaging to be used in challenging applications where this very effective sealant is used;
• Barrier INNO-LOK(r) – teams Zip-Pak’s proprietary barrier zipper with Hudson-Sharp’s patented pre-zippered film technology, and offers optimum convenience and extended shelf life for oxygen-sensitive products;
• Polypropylene-Compatible zippers – Zip-Pak’s special coatings make it possible
to seal to the polypropylene films used by many packagers;
• PVC Zipper – paired up with PVC pack-aging film to package items that require a sturdier structure than the traditional polyethylene package;
• EZ Open Strip(tm) – the easy-open, non-resealable feature provides easy access and tamper evidence for one-time use packages and is ideal for food service applications;
• RETORT(tm) zipper – provides converters and food marketers with resealable packaging technology that withstands the high temperatures required during retort packaging. A unique blend of resins results in a zipper that can tolerate the temperatures others cannot; it does not melt or degrade during the retort process. The range of applications includes moist pet food, tuna, soup, condiments, fruits and vegetables.

Resealing the world
Zip-Pak now supports customers in 48 countries, many with their own unique, cultural packaging needs. In Japan, for example, packages are generally smaller but their appearance is nothing short of a work of art. In Europe the pet food market demands Zip-Pak’s large format packaging while in China, Latin America and New Zealand, the company’ flex-film packaging has aided powdered milk manufacturers. To help meet such wide-ranging packaging requirements, Zip-Pak licenses its technology to major machine manufacturers around the world. The company just commissioned its first plant outside the U.S. in the Netherlands this February. Zip-Pak also has offices in Sao Paulo, Brazil; Tokyo, Japan and Melbourne, Australia, as well as agents around the world.

In addition to packaging, Zip-Pak operates an equipment division that develops machinery attachments to apply zipper in-line on packaging equipment and pre-made pouch machines. Zip-Pak can boast more than 700 successful conversions to resealable packaging completed in the past 25 years; attachments for zipper are now offered through many OEMs as turnkey, as well as retrofits, for existing equipment.

Inherent in the Zip-Pak philosophy is its desire to not just focus on the zipper, but also to understand the customers’ needs to suggest the best packaging solution. This is why the company that helped to give us ZIPLOC” is finding myriad ways to reinvent the resealable bag, always with the knowledge that the consumer, the infinite driver of all trends, will make sure the technology is put to good use.