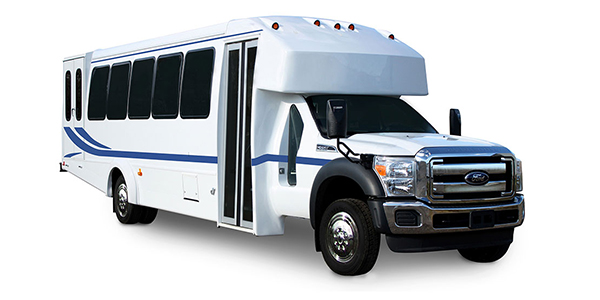 Goshen Coach of Elkhart, Ind., is no ordinary bus manufacturer. Superior construction, pleasing amenities, Federal Transit Administration testing and attractive pricing all play major roles in the Goshen Coach value story.Goshen Coach and its sister division – McCoy Miller, a manufacturer of high-quality ambulances profiled in US Industry Today’s September 2000 issue – are owned by Warrick Industries, Inc., a privately held company specializing in the manufacture of specialty vehicles. In November 1998, Warrick was purchased by Cleveland-based Morgenthaler Ventures, an investment capital firm focusing on health care, information technology and industrial technology. With Morgenthaler’s power and strength behind it, Goshen Coach is well equipped to continue its tradition of providing quality and value to its customers.

The company has maintained its 15-year-old philosophy of dedication to quality even when no one is watching over the shoulders of the manufacturing process. “We build a powerfully constructed bus, yet value-priced, and this makes us very competitive in the marketplace, especially in the muni/DOT bid market,” says Randy Nemitz, vice president of sales and marketing.

Goshen Coach manufactures about 2,000 buses each year from its three Elkhart facilities, which total about 150,000 square feet. One plant is completely dedicated to the production of the Goshen GCII, and the other two facilities manufacture the company’s mid-sized, medium-duty buses and the smaller Pacer series. Its 250 employees live the company’s philosophy of producing nothing short of superior workmanship in every product that drives off the production floor.

Hard Bodies
The cornerstone to Goshen Coach’s reputation for quality rests on the actual body construction of each of its vehicles. Goshen coaches are not just pretty faces. Underneath their attractive appearances are units of solid integrity.

The coach walls and ceilings are fully insulated and include four layers of superior construction. Vacuum lamination of walls and ceilings offers increased strength to the vehicles without having to use fasteners. The interior walls and ceilings are made of fiberglass-reinforced plastic, a material that enhances durability and easy cleanup. Two Lauan layers, one interior layer and one exterior layer, separate the aluminum from the steel, thereby preventing electrolysis from occurring. All-seat tracking is welded directly to steel side walls or steel floor sections for enhanced strength and safety.

Goshen Coach is striving to be a world-class designer of buses by making total quality a way of life for each of its employees. “Quality is something that must be built into a vehicle. It cannot be inspected into it,” says Bren Harris, vice president of operations. “Our goal is to standardize our processes so that we can better focus on producing a quality vehicle every time.”

Foundation for Strength
Furthering its drive to produce only excellence, Goshen Coach rests both its bus bodies and its reputation on only the best chassis the world has to offer, such as Ford, Chevrolet, International Navistar and Freightliner. Goshen is the second-largest manufacturer of buses using Ford cutaway chassis. Plus, Goshen tests every vehicle at the federal testing grounds in Altoona, Pa. “The testing allows our customers to know for what life cycle our vehicles have been tested by the federal government,” says Nemitz. The GCII and Pacers are tested as four-year vehicles, and the Sentry is tested as a five-year vehicle. The Sentinel is tested as a seven-year, 200,000-mile vehicle and the Sentry MB55 has a 10-year or 350,000-mile life cycle.

Goshen Coach builds its GCII and Pacer minibuses from the Ford or Chevy cutaway-van chassis. The bodies are integrated into the existing cab of the chassis. Both the GCII and the Pacer are available with American Disabilities Act (ADA) features to accommodate the physically challenged. The GCII, Goshen’s most popular cutaway bus, can comfortably transport up to 25 passengers.
The company typically builds its midsize, medium-duty Sentry buses on heavier-duty Freightliner or Workhorse rail chassis. These models look like a transit bus, including the flat front. The exception to this general rule of thumb is the Sentinel midsize, medium-duty bus, which is built onto an International cutaway chassis. Both the Sentry and the Sentinel are built on heavier-duty chassis to afford a longer-lived vehicle with less down time.

The Goshen Sentry MB55 is the company’s newest offering in the medium-duty market. Featured in this bus is Freightliner’s MB55 chassis, which can be equipped with air brakes. This is the first time that Goshen Coach has offered a front-engine, air brake-equipped, 10-year bus to the transit, paratransit, private and commercial markets.

The Guardian is Goshen’s newest product, offering a full-entry step-well lift. “The Guardian has a wheelchair lift hidden right inside the step well, so you can not tell that it is a bus for transporting physically challenged passengers,” says Nemitz. “Therefore, you have one bus that can serve a variety of different purposes, and that removes the visibility of the wheelchair lift.”

The Guardian, as well as every Goshen Coach, can be upgraded into a more luxury-type vehicle with amenities like television, VCR, reading lights and special interior options. “We can provide a broad spectrum of applications for all of our vehicles,” says Nemitz. “Our ability to offer this range is unique, because some manufacturers in the marketplace lend themselves to only one or the other.” For example, a company might manufacture nicely appointed luxurious units that can never become low-priced or value-priced bid vehicles. On the other hand, companies producing value-priced bid-type vehicles sometimes cannot configure them into more luxurious coaches. “We at Goshen Coach can offer all of these options, and we can offer customers the right coach across the spectrum of vertical markets,” says Nemitz.

Driven by a desire to reduce both air pollution and dependence on foreign oil, Goshen Coach – along with the entire bus industry – has climbed aboard the movement toward alternative fuels. In fact, the company is in the driver’s seat, having been contracted by Ford Motor Company to build the first three buses on its new compressed-natural-gas (CNG) chassis. Two of the buses will be used in various crash tests, which will monitor the fuel system’s integrity. Ford’s marketing department has also purchased a CNG GCII cutaway bus to display in shows throughout the country. Goshen also offers the CNG option on its factory models, and offers the propane option on the Sentry model.