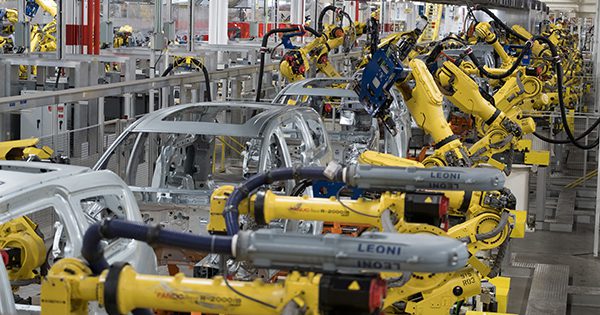 A $744 million upgrade provided the longstanding minivan manufacturing facility with the latest innovative equipment and processes to build both traditional gas engine and hybrid versions of the newly styled sixth generation minivan. David Soyka reports on how this Ontario, Canada, manufacturer plugs in to resourcefully build a more efficient family hauler.

“We’ve been making minivans for 33 years,” notes Michael Brieda, plant manager for the FCA US Windsor Assembly Plant in Ontario, Canada. “But it was still a huge deal that the Company had the confidence in us to invest $744 million (over $1 billion CAD) in plant upgrades to launch not only an innovative new minivan platform—the Chrysler Pacifica—but take it to the next level to produce the first electric plug-in hybrid minivan. What we’re doing here establishes company-wide manufacturing standards not only for equipment and processes, but how our workers approach challenges and devise efficient solutions.”

Adding to the complexity of reconfiguring assembly operations to build the new Chrysler Pacifica was the need to maintain operations to continue production of an existing minivan line. So the plant needed to accommodate two completely different architectures with no shared parts as well as integrate stations specific to the hybrid model. And all within the existing floor space. “There was no practical way to expand the building,” Brieda says. “Everything had to be designed to fit as efficiently as possible within the existing structure, which also resulted in an entirely new assembly process from what we had been doing.”

The 2017 Chrysler Pacifica is a completely re-engineered platform providing nearly 40 new minivan firsts in addition to the hybrid option. The minivan boasts the largest interior volume in the segment, the latest safety and security features, premium audio and convenience technologies, and styling that is both aerodynamic and eye-catching. All provided in a class-leading ride characterized by reduced noise, vibration and harshness in a body structure that is the lightest and stiffest for a minivan, making it more responsive and adaptable to road conditions. The Chrysler Pacifica replaces the Chrysler Town and Country and eventually the venerable Dodge Grand Caravan, which Windsor Assembly currently continues to manufacture.

While they share the same assembly line, the hybrid and gas-powered models have very different engines and drivetrains. The gasoline model employs a 3.6-liter Pentastar V-6 engine with nine-speed automatic transmission that produces 287 horsepower and 262 lb.-foot of torque, with a fuel economy rating of 28 miles per gallon (mpg) for highway driving.

To satisfy current demand without incurring downtime or otherwise affecting productivity, the plant has built-in flexibility to easily shift gears between making the two models.

While they share the same assembly line, the hybrid and gas-powered models have very different engines and drivetrains. The plant has built-in flexibility to easily shift gears between making the two models to satisfy current demand without incurring downtime or otherwise affecting productivity.

“Certain functions for the hybrid that can’t be integrated into the main assembly are handled off-line,” Brieda explains. “For example, hybrid engine build-up is conducted in a separate dedicated area. It’s a simple arrangement, but it provides the assemblers a place to focus on performing high quality work and not worry about changing out equipment or whether they have all the right tools handy.”

Perhaps almost as important as the idea on how to handle the unique assembly needs for the Pacifica Hybrid is where the idea originated: the workers. “We ran pilot programs to test equipment and processes. Hourly workers with extensive experience were selected as team leaders to run the pilots and, most importantly, obtain feedback on what workers thought could be done better. The dedicated off-line hybrid engine assembly area is just one example of how we incorporated their ideas. The best source to find out how to improve assembly workflows is always going to be the people doing the actual work,” Brieda says.

The pilot programs were implemented under the Company’s Work Place Integration (WPI) process, a systematic approach to facilitate vertical start-up of new model launches, identify best practices, plan, test and react to new workflows so as to minimize significant changes to final implementation that could affect cost, timing and efficiency. “While we’re always constantly tweaking things to achieve continuous improvement,” Brieda points out, “the assembly processes developed during the pilot phase are essentially the way we’re running the plant today.”

Not only were the assembly processes redesigned, but in many cases the equipment to perform them as well. For example, more than 80 percent of the Windsor body shop equipment is either brand new or modified, comprising the addition of 822 robots, the addition of 19 lines and retooling five others, and the upgrading of 1.3 miles of conveyers. Particularly significant is the first North American installation of a PULSE (Propulsion Using Linear Synchronous motor Energy) transfer system that applies thrust, rather than torque, to move body sections through robotic workstations. This not only increases transfer speed and reduces component wear, but eliminates down time caused by the previous chain-driven system.

Yet another Windsor first is a Laser Radar device, a non-contact dimensional measurement instrument commonly used in the aerospace industry. With an innovative custom dual arm design, an additional first, the Laser Radar system reduces vehicle measurement from two-and-half-hours to one, allowing the plant to measure 15 vehicles a day as compared to only six under the previous system.

Nearly all of the 2300 paint shop carriers were redesigned and 135 robots reprogrammed to allow for maximum flexibility to put a better shine on both the old and new minivan architectures. A new robotic sealer system applies 90 yards (83 meters), nearly the length of a football field, of sealant to the Pacifica’s underbody, engine compartment, interior and roof ditch, the area where the roof meets the body side. A highspeed friction drive transfer system, similar to what powers a rollercoaster, now more efficiently pushes vehicles through the sealer cell.

Windsor is the first FCA North American plant to incorporate Oil Suparator, previously used solely in Europe, in its pretreatment system. During this phase of the paint process, the minivan body is dipped into a bath to remove any oil applied to protect the raw sheet metal during shipping before it moves to the e-coat process. The Oil Suparator pulls the residual oil out of the bath to prevent contamination to additional vehicles moving through the process.

“Everything we do here is aimed at improving quality,” Brieda emphasizes. “And all of us here at Windsor are particularly excited about the quality expectations for the Chrysler Pacifica. We’re building on a tradition of providing people with a utilitarian family hauler, but adding advanced style and safety features combined with the latest technologies and conveniences that make the vehicle more akin to an SUV than the staid minivan of old. The Pacific Hybrid is a further innovative leap towards greater fuel efficiency and reduced emissions. Just the other day I was talking to one of our employees who is very involved in environmental issues. His enthusiasm in being part of an undertaking to provide a greener vehicle to a wide range of consumers is something we all share and take pride in. It’s all part of our driving ambition to make the best vehicle possible using the best tools and the best people.”